Four additional drill holes have been completed in the Gnu Zone target area with samples shipped and assays pending.

Heli-borne-geophysics data acquisition and processing has been completed.

Blue Star’s CEO, Grant Ewing, commented, “Our 2022 exploration campaign has begun with impressive results returned from DD22-FLO-002, which has the highest value (grams gold x width metres) of all intercepts drilled by Blue Star. The intercepts in FLO-002 are expected to allow the conversion of existing inferred ounces to an indicated category and expand the Flood Zone resource. Our understanding of controls on mineralization has improved significantly over the last several months and this has contributed to better targeting at both the deposit and property scale. Several promising target areas throughout our prospective landholdings will be assessed during the current program.”

DD22-FLO-002 intersected 15.00 g/t gold over 17.65 m, and 5.30 g/t gold over 5.70 m, in a sparsely drilled area of the Flood Zone at approximately 100 m vertical depth. Both intercepts are within a structurally disrupted zone between a high Fe-Ti basalt unit and lower Fe-Ti basalt unit immediately adjacent to the sediment fold hinge. Drill hole DD22-FLO-001 tested the width of the Flood Zone in a near surface area where previous drilling ended prematurely. Core lengths of 6.64 m and 2.30 m with acicular arsenopyrite mineralisation were encountered in DD22-FLO-001; assays are pending.

Other Gnu Zone drill holes completed to date include DD22-QIP-001 and DD22-QIP-002 that are evaluating the new polymetallic vein discovery (20.8 g/t Au over 8.15 m) made by Blue Star in 2021. All of these holes are being sampled or have samples at the laboratory and these assays will be released once results are received.

Darren Lindsay, Blue Star’s VP Exploration stated: “The team has done an outstanding job from getting the camp running, to successfully completing the regional magnetics program over Roma and Hood River, to delivering these initial spectacular results (FLO-002) in areas of geological uncertainty within the existing Flood Zone deposit. In addition, another polymetallic vein has been discovered while determining the extent of the 2021 vein discovery at the Gnu Zone. On top of these successes the exploration team is also very excited about implementing the detectORE™ system of Portable PPB Pty Ltd in our regional exploration efforts.”

Figure 3: Table of results to date.

Figure 4: Table of drill collar locations for holes reported in this release. 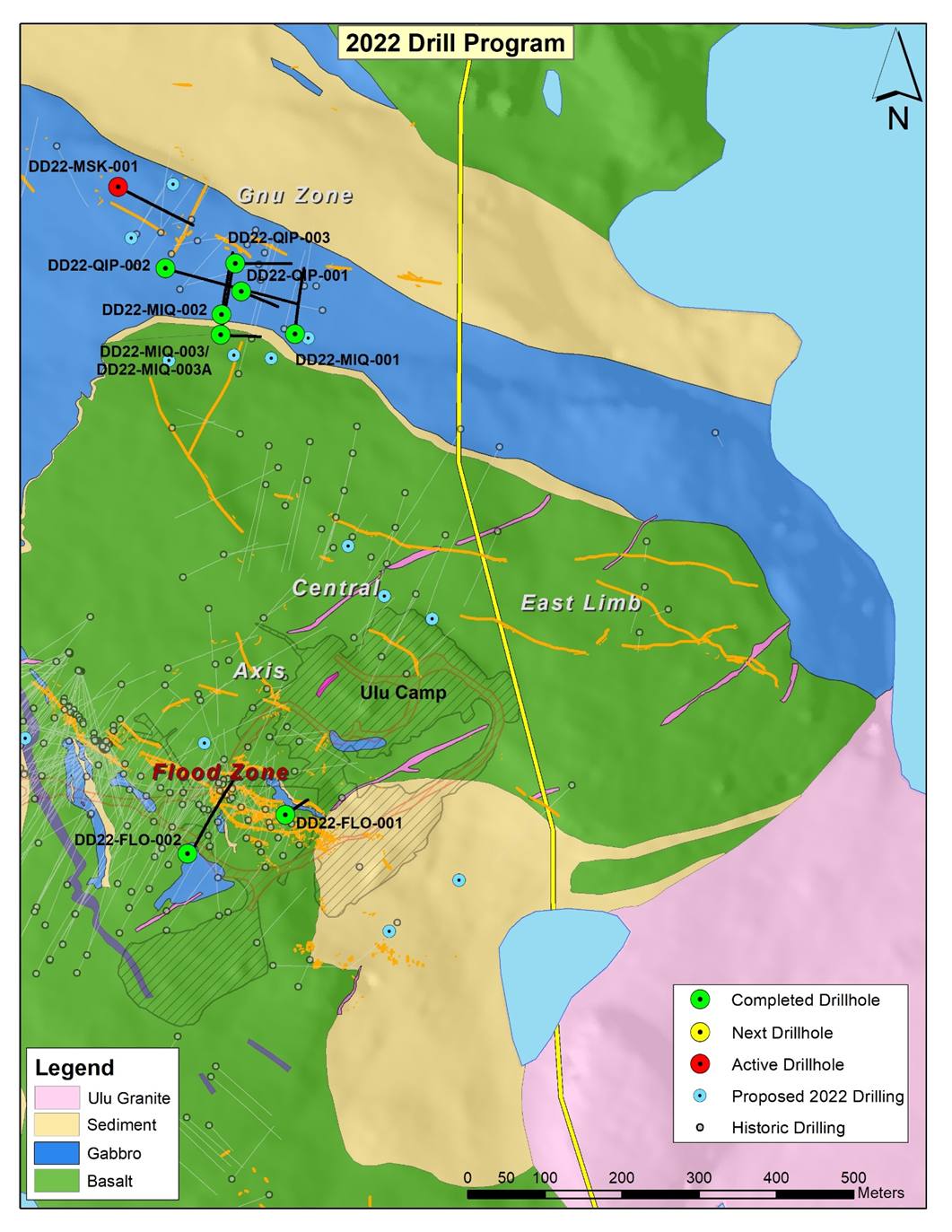 An orientation survey over the known areas of mineralization in the Ulu lease including the Flood Zone and the Gnu Zone have been completed with samples processed by the detectORE™ system for rapid low level gold analysis by portable XRF. Anomalous zones were detected in the areas expected including down-ice of the Flood Zone deposit. Subsequently the regional sampling program on the Roma project has been initiated. 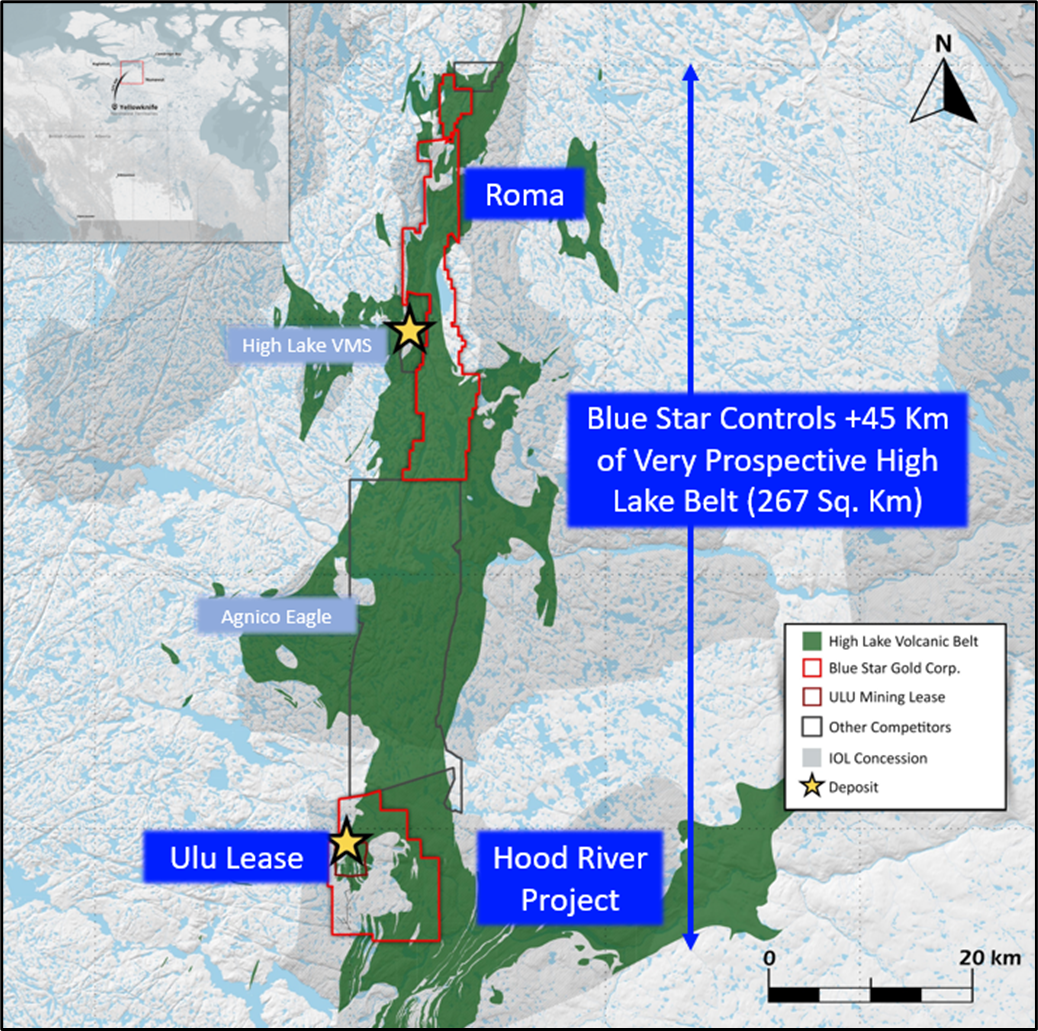 DetectORE™ is a new rapid geochemical analysis technique developed by Portable PPB Pty Ltd to be used at exploration sites. Regional geochemical samples (1000m x 50m grid) consisting of till samples collected from frost boils were sieved to <1 mm to capture approximately 2kg of material; samples were dried with a 500 gram split used in the analysis technique which includes final reading of the sample collector devices by pXRF, reject material was also analyzed by pXRF for multi-element review and retained. The QP has ensured the QAQC program of detectORE™ of two reference materials per processing batch (90 samples) and at least two certified collector devices are analyzed during the analysis stage was followed. Additionally, the Company inserted one blank, one duplicate, and one known anomalous sample into the initial processing batches.