A total of 3,690 metres of NQ diamond drilling was completed across four key target areas during the program, including the Flood Zone, the Axis Zone, the Gnu Zone and the Central-C Zone.

Approximately 50% of the samples from the program are pending assay results.

Grant Ewing, Blue Star’s CEO stated: “Blue Star conducted another successful exploration campaign at its highly prospective Nunavut projects. The initial results of the program from DD22-FLO-002 returned the highest value (grams gold x width metres) of all intercepts drilled by Blue Star to date. Several other prospective target areas throughout the Company’s landholdings were assessed during the program, with significant results also returned from the Gnu Zone area drilling. An important component of the program was the successful progression of many of the prospective target zones closer to drill ready status.”

The Company completed 3,690 metres of drilling during the program, 3,055-line km of airborne geophysics, and a regional till sampling program on the Roma Project. In addition, detailed review and prospecting/mapping of 58 of the targets within the >100 compiled pipeline showings were conducted.

DD22-MSK-002 returned no significant intercepts. The hole was drilled in gabbro; the targeted polymetallic vein was not intercepted. Blocky pyrrhotite (3%) and blocky chalcopyrite (1%) occur on the margins of a quartz vein from 44.19 to 44.29 m. The vein displays strong calc-silicate alteration.

DD22-MSK-003 intersected 1.04 g/t gold over 1.5 m, and 1.90 g/t gold over 1.71 m. The hole was drilled in gabbro and two faults were noted in the drill hole: one fault (30 cm) with gouge and fragmented clasts of gabbro and quartz was intersected at approximately 37 m, the second larger fault zone from 112.27 to 113.11 m consists of multiple gouges (<10 cm each), with angular clasts and fractured core filled with calcite between the intervals. The targeted polymetallic vein (93.71 to 94.91 m) contains 7% pyrrhotite, 7% sphalerite, 5% blocky and acicular arsenopyrite, 1% pyrite and sphalerite with traces of chalcopyrite within strongly sheared gabbro.

DD22-MSK-004 returned no significant intercepts. The hole was drilled in gabbro and intersected a fault zone from 111.80 to 118.73 m and a quartz vein containing 1% blocky pyrite and pyrrhotite from 133.60 to 133.97 m. Below the highest strain portion of the fault zone, a few mm and cm scale quartz veins contain up to 3% blocky pyrite. Calc-silicate alteration bands occur at the same orientation as the mineralized veins, possibly representing the margins of the targeted polymetallic vein.

The Gnu Zone target area evaluated during this program is comprised of up to four known shear hosted quartz-polymetallic veins at high angle to a gabbro-sediment contact that hosts calc-silicate-acicular arsenopyrite alteration. All drilling this season was completed with oriented core to assist geological modeling. Late faults complicate the area however it is believed that the faults can be resolved with the current initial wide spaced drilling program.

Figure 1: Table of drill collar locations for holes reported in this release.

Figure 2: Table of results to date. 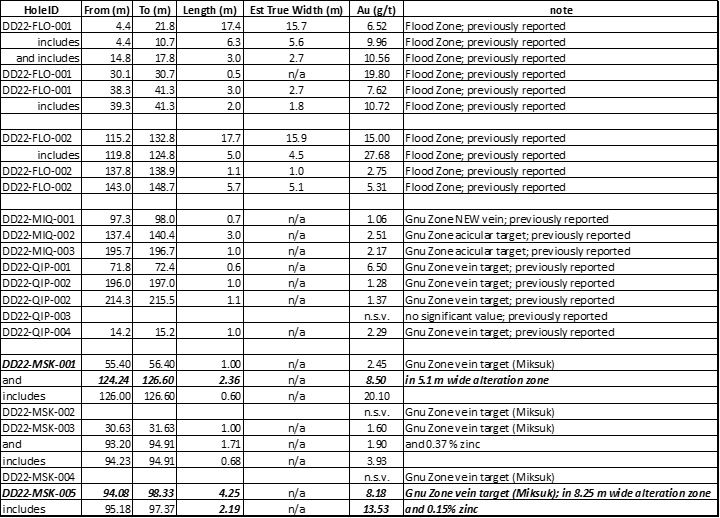 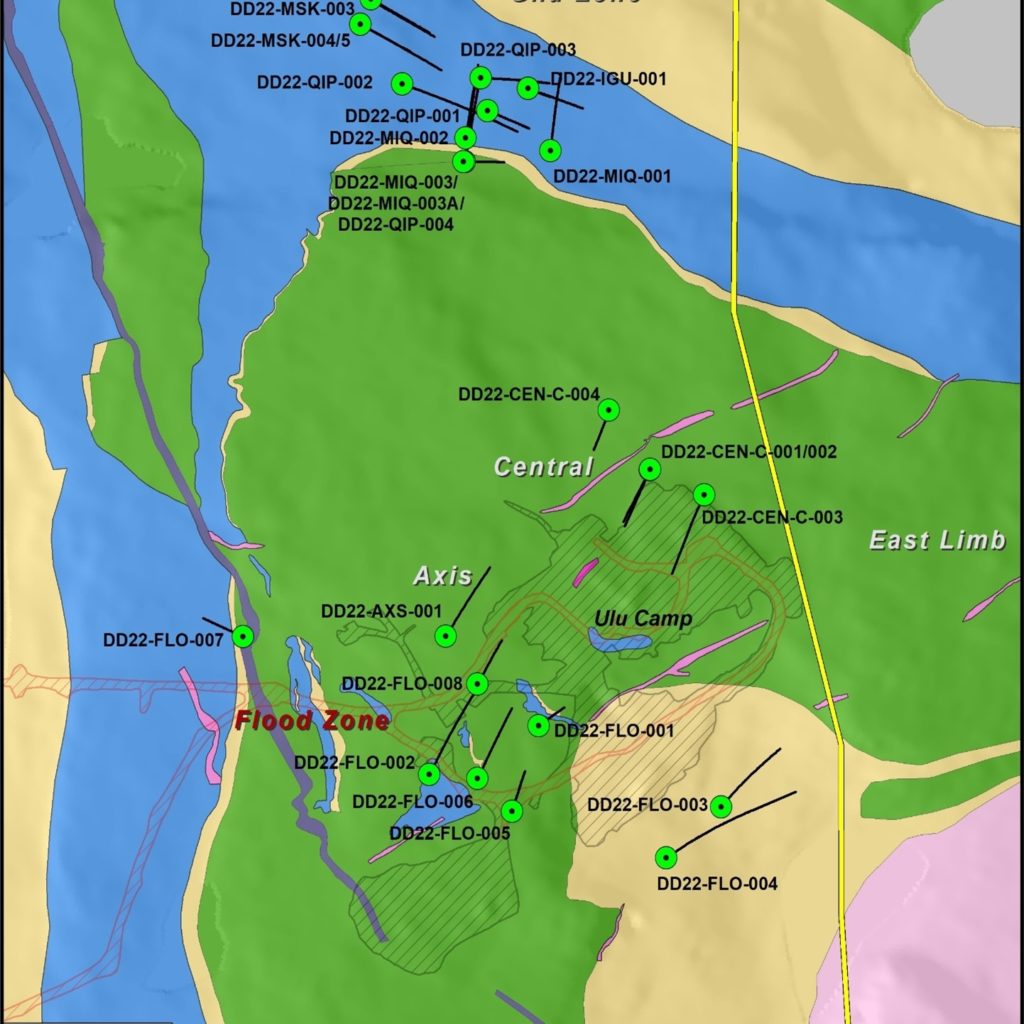 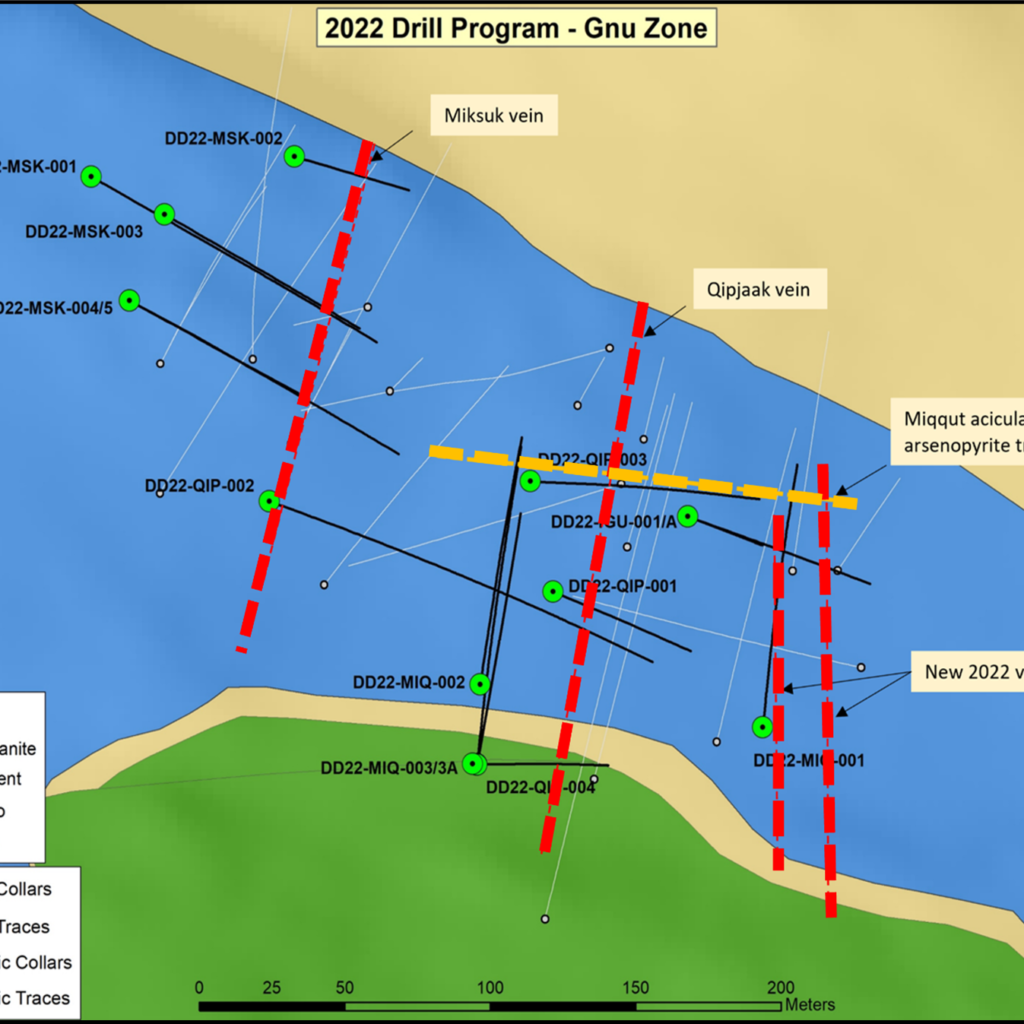 Figure 5: Inclined schematic longitudinal of the Miksuk Vein in the Gnu Zone. 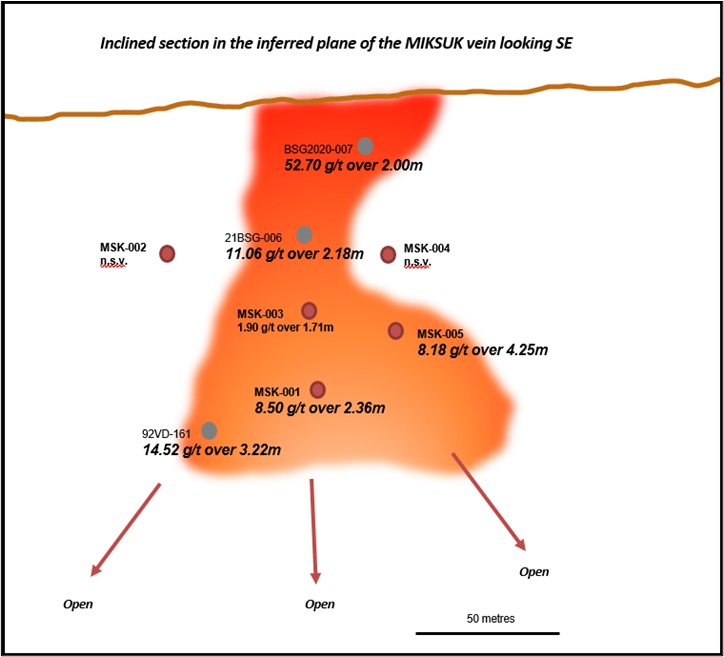