Highlights from the program

Blue Star initiated its 2021 exploration campaign on June 8th, 2021 with a program of selective camp improvements, equipment evaluation and planning for remediation efforts and a substantial drill program. Heli-borne magnetometry kicked off the exploration program in late June and completed in early July covering key target areas on Ulu and Hood River and was expanded to cover the Roma Fold target. Drilling was initiated on July 16th and remediation activities (landfill) started on July 15th. A second drill was made available July 31st and continued drilling through September.

COVID testing totaling 471 tests were conducted over the season. This is the second exploration season where the workforce was COVID negative.

Exploration drilling comprised of two holes for 348m at the NFN (North Fold Nose), 7 holes for 1,184m at the Gnu Zone, 6 holes for 1,520m at the Central Zones, 5 holes for 991m at the Axis Zone, 2 holes for 295m at the East Limb Zone and 3 holes for 674m at the Flood Zone. Additional exploration work included reviewing select sections of historical drill core in the Flood Zone, select mapping for structural controls in the Flood, Gnu, Central, East Limb, and NFN zones with preliminary mapping efforts at the Crown-Pro Trend and the Roma Project. An orientation till sampling program along with prospecting and selective sampling occurred on the Roma Project and prospecting and channel sampling occurred on the Crown-Pro trend.

Discussion of the 2021 exploration program

Flood Zone: Three holes were drilled to evaluate geological complexity and grade distribution questions with two holes extended to evaluate an unmodeled zone and the Axis Zone at moderate depths. Two of the holes have been reported in a news release dated September 22, 2021 including intercepts of 4.91m of 19.1 g/t gold and 2.64m of 13.0 g/t gold. Additional assays are pending.

The Axis Zone is considered a high priority target area due to its immediate proximity to the Flood Zone and existing underground development. Drilling in this area stepped along the surface expressions of alteration and mineralization that are interpreted to propagate along the Ulu fold axis immediately east of the Flood Zone (Figure 3). Despite the proximity and similarity in mineralization style to the Flood Zone no drilling was undertaken in this area by any company since the initial 1990 drill holes. Four holes were drilled covering approximately 200m of strike and 150m of vertical depth. Silicified zones with Flood Zone style acicular arsenopyrite up to 2.50m wide were intersected. Assays are pending.

The Central Zones are three zones sub-parallel to the Flood Zone deposit occurring on the east side of the Ulu fold hinge that may extend to the southeast to converge with the East Limb Zone. Historical drilling in this area was shallow; a three-hole fence was used to test all three Central Zones. Silicified zones with Flood Zone style acicular arsenopyrite up to 2.0m wide were intersected down to a vertical depth of 300m. A fourth hole stepping out from the deepest test and a shallow test where the Central and Axis Zones are inferred to merge were also part of this drilling. Assays are pending.

NFN Zone: A small program consisting of two drillholes (21BSG013, 21BSG017) at the NFN zone was used to define a full cross section across the folded stratigraphy. Both holes intercepted the targeted polymetallic vein. This section will be used along with historical drilling to better define the fold, and more importantly the plunge of the hinge line. All assays are pending.

Initial field work was conducted to evaluate known targets and geological controls on potential mineralization at the Crown-Pro trend in the Hood River Area. This involved limited wide spaced mapping and prospecting traverses and detailed evaluation of an inferred axial planar shear zone associated with tight folding of geological units – a feature similar to that of the known high grade Flood Zone deposit. Next steps include the complete compilation of historical work leading to target generation along the Crown-Pro fold axis similar to that undertaken on the Ulu fold axis in 2021.

The recently acquired 100% owned Roma Project received limited detailed mapping and sampling at the drill ready to near drill ready Roma Main and Roma Fold targets. The Roma Fold was a focus for the heliborne magnetometry survey. Prospecting sample results are pending. Drift prospecting lines of tight spaced basal till samples were conducted on parts of the property that have received little to no historical work based on the data compilation. This work is expected to derive the next tier of targets for follow up on the Roma Property. Results will be released as they are received and reviewed. 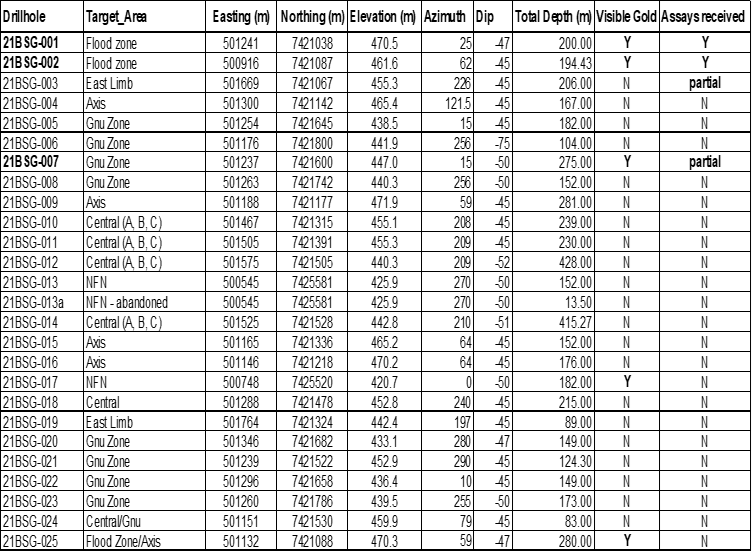 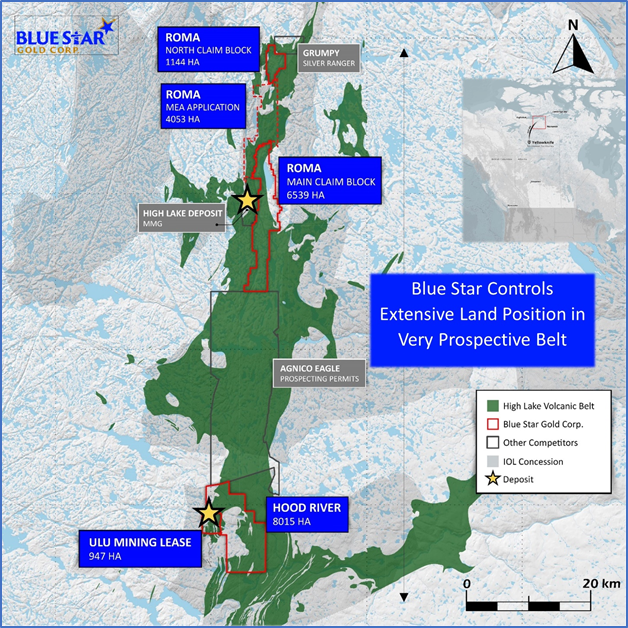 Figure 2: Map of the Ulu and Hood River Area. 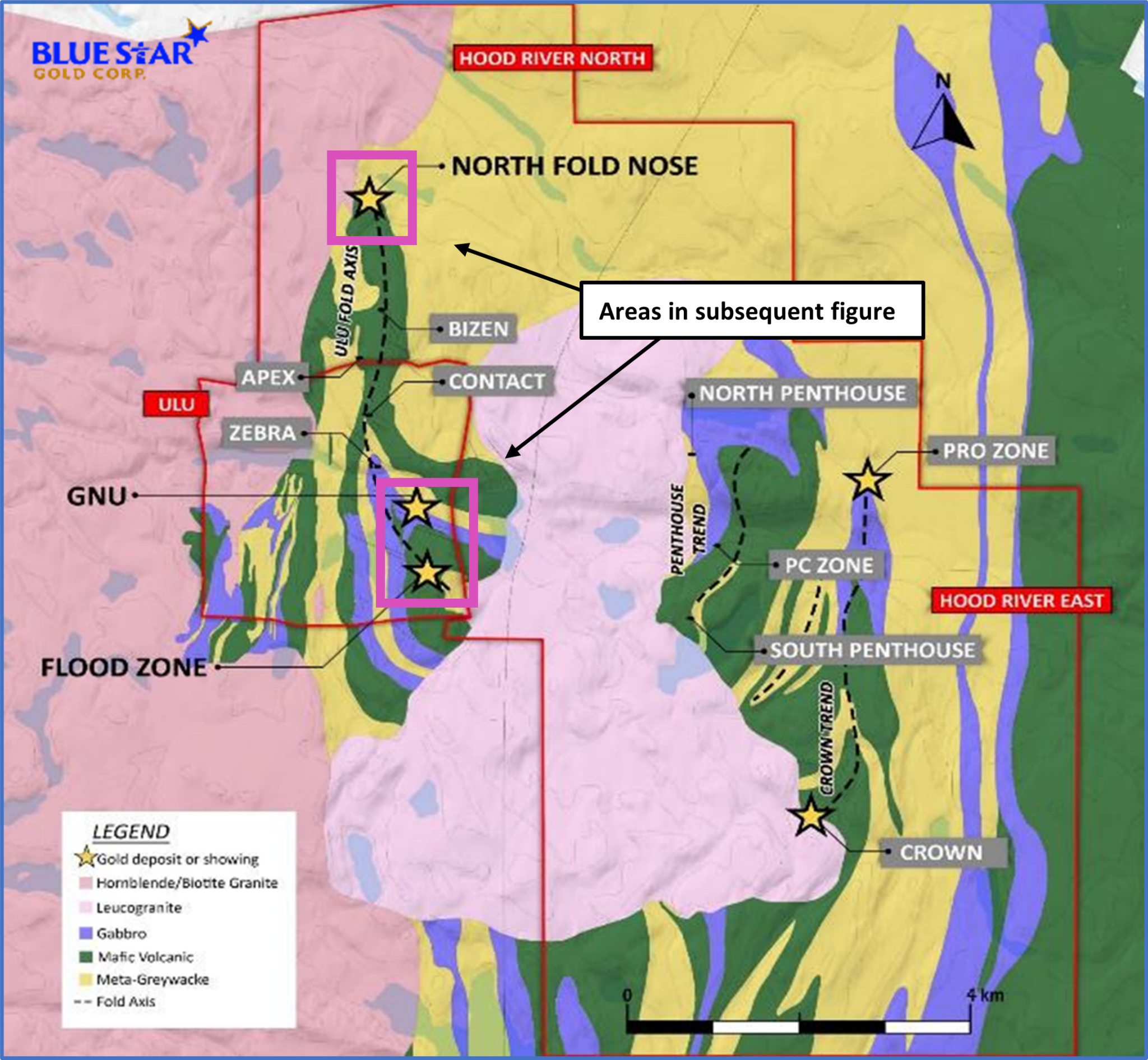 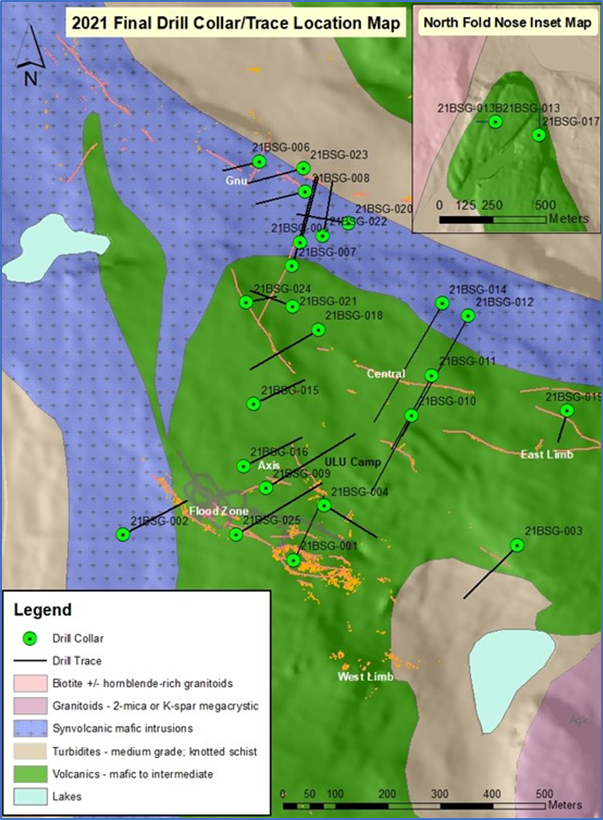 Figure 4: Change in Waste Piles from July to September 2021. 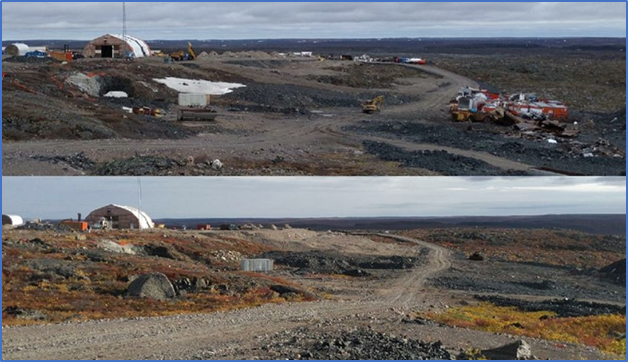 The exploration campaign evaluated several high priority targets in the area of the known high-grade Flood Zone Deposit on the Ulu Project, and on high potential targets along the Ulu fold hinge.  Numerous priority targets exist along the 5 km long Ulu Anticline which extends from the Flood Zone Deposit on to the contiguous Hood River Project up to the North Fold Nose Zone. Objectives of the 2021 program included better understanding the controls of higher-grade zones within the hosting structures, evaluating additional structures on and adjacent to the Ulu fold hinge, and expanding and infilling previously known but undertested mineralized zones.

Assay results from the balance of the program will be reported as they are received. Full collar tables and assay tables will be made available on the website in due course. Core samples are being cut by core saw with one half of the core retained and the other half sent for analysis. Samples are being prepared by ALS Yellowknife-Geochemistry and being analyzed at ALS Global, North Vancouver. Gold analysis is by fire assay using ALS code Au-AA26 and multielement analysis by code ME-MS61. Control samples include a crush duplicate every 20 samples; certified reference material is being inserted once every ten samples. Reported assay intervals use a minimum 2 g/t gold assay cut off with the inclusion of up to 3m of material below cut-off. True widths for all but the Flood Zone are not known due to lack of drilling and may range from 30% to 90% of drilled lengths.

Blue Star is a gold company focused on exploration and development within Nunavut, Canada. The Company owns the Ulu Gold Property lease, an advanced gold project, and the highly prospective Hood River Property that is contiguous to the Ulu mining lease. With the recent acquisition of the Roma Project, Blue Star now controls over 16,000 hectares of highly prospective and underexplored mineral properties in the High Lake Greenstone Belt, Nunavut. A significant high-grade gold resource exists at the Flood Zone deposit (Ulu lease), and numerous high-grade gold occurrences and priority targets occur throughout the Ulu, Hood River and Roma Projects.