Vancouver, British Columbia–(Newsfile Corp. – February 10, 2020) –  Blue Star Gold Corp. (“Blue Star” or the “Company”) is pleased to report the Company has completed the acquisition of the Ulu Gold Property (the “Ulu”) from Mandalay Resources Corp. (“Mandalay”). Supplementing its high-grade gold resources, the Ulu includes a substantial inventory of capital equipment, a Weatherhaven camp with shop and a 1,200 m long airstrip. The mineral rights in the form of a Crown mining lease were transferred on January 7, 2020 to Blue Star. The Kitikmeot Inuit Association (the “KitIA”) agreed on October 1, 2019 to transfer surface access in the form of a land use licence, and on September 10, 2019 the Nunavut Water Board (“NWB”) authorized the assignment of the Ulu Water Licence 2BM-ULU1520 to Blue Star.

Through the final steps in the Ulu acquisition process, Blue Star has:

The Ulu Gold Property is located approximately 50 km north of the Arctic Circle in the Kitikmeot region of western Nunavut. The site of the future deep-water port at Grays Bay is 100 km to the north of the lease and the proposed route corridor for the all-weather Grays Bay road passes in close proximity to Ulu. The Property consists of the renewable 21-year Mining Lease No: 3563 with an expiry date of Nov 18, 2038 and covers an area of approximately 947 ha. The lease hosts an advanced gold project that between 1989 and 2012 saw significant exploration and development. The past work includes approximately 1.7 km of underground development and approximately 405 diamond drill holes that produced 97,820 m of core. Supplementing the exploration data, metallurgical testing by Blue Star on the Flood Zone gold mineralization has shown that gold is recoverable in amounts greater than 90% by gravity, flotation and cyanidation. 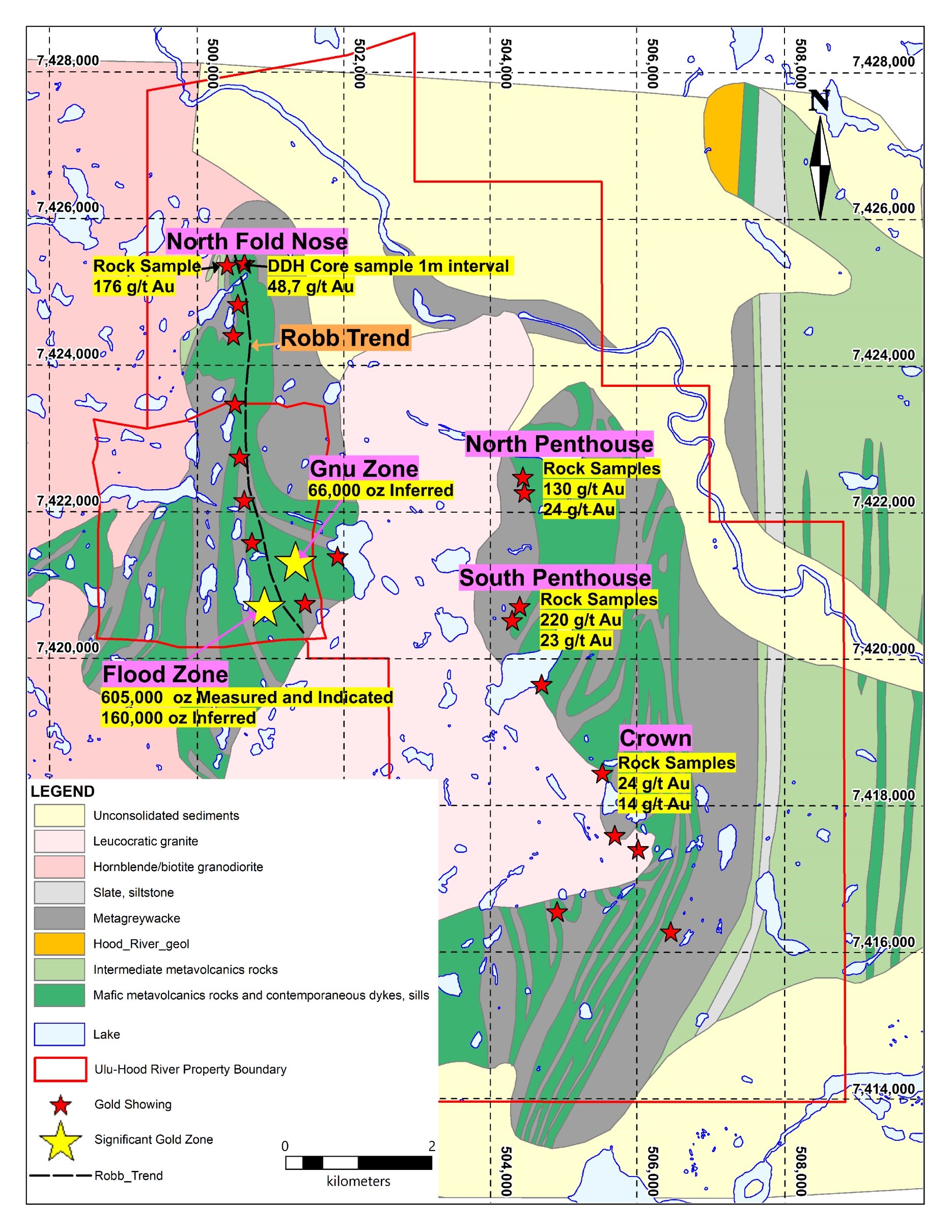 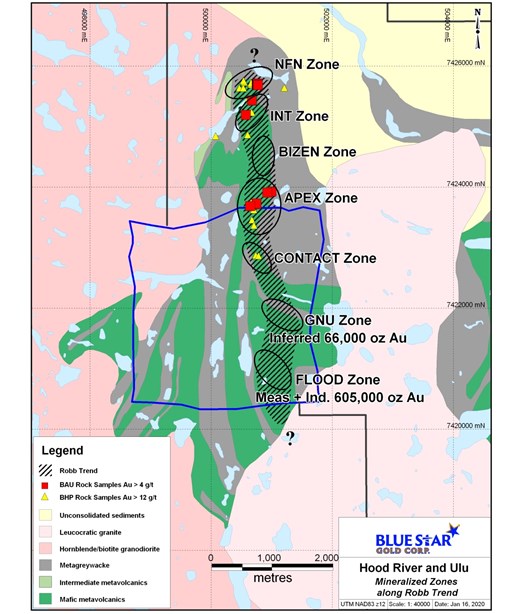 Figure 2: Blue Star’s detailed plan of the +5 km-long Robb Trend gold occurrences within the Ulu Gold Property and the north-western part of the Hood River concessions.

Stephen Wilkinson, the Company’s CEO and President commented, “With the Ulu transaction complete, Blue Star has advanced beyond junior explorer status. The entire Blue Star team is reinvigorated by this event, seeing the path forward to our targeted gold operations. Our Company now possesses assets with tangible value in the form of its measured and indicated gold resources supplemented by the infrastructure, capital equipment and Ulu’s significant database. We intend to be working as soon as practical to begin our 2020 programs of remediation at Ulu and exploration on both Ulu as well as Hood River where we believe there should be another gold trend similar to the Robb Trend.”

Table One: The Company filed its technical report, titled “Technical Report on the Ulu Gold Property, Nunavut, Canada” dated July 10, 2015 from which the table of resources was taken. Gary Giroux, P.Eng. of Giroux Consulting Inc., Bob Singh, P.Geo. of North Face Software Ltd. and Paul Cowley, P.Geo. of Buena Tierra Developments Ltd., are Qualified Persons as defined in NI 43-101 and were responsible for the preparation of the Technical Report.

Blue Star is a Vancouver-based gold and silver company focused on exploration and development within Nunavut, Canada. The Company through its subsidiary, Inukshuk Exploration Inc., owns the highly prospective 8,015 ha Hood River gold concessions located contiguous with the Ulu mining lease. Inukshuk acquired its interest in the Hood River property through a renewable, 20-year Mineral Exploration Agreement with Nunavut Tunngavik Incorporated (“NTI”) which holds subsurface title to Inuit Owned Lands (“IOL”). The Hood River property located within the CO-20 IOL parcel is administered by the NTI through the HOODRIVER-001 MEA signed between Inukshuk and NTI dated June 01, 2013. Blue Star has recently acquired the Ulu Gold Property, an advanced gold and silver project and with regulatory approvals has completed the transmittal of the mining lease and assignment of the permits and licenses. Together with the Hood River concessions, Blue Star controls nearly 10,000 ha of perspective mineral claims within which the Company has identified more than 40 gold occurrences.